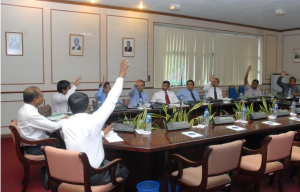 It is not an issue of MPs being paid an allowance. They are paid a monthly remuneration package of 62,500.00 Rufiyaa for the seats they occupy on behalf of the constituencies they represent.

A lot of critical legislation which should have been completed by the parliament are still pending, and the MPs spend much of their time in scuffles with each other and engaged in political drama which is aired lived for their personal benefit. Several meetings are cancelled due to a lack of quorum with the MPs paid beyond the means of the public coffer.

The committee allowance alone is 1.5 million Rufiyaa for the month of March. This is when the Ministry of Islamic Affairs has gone into competition with the civil society to raise funds for the maintenance of mosques in the country, as the government cannot afford it. The ministry expects to raise 1.5 million Rufiyaa through its week long effort, by putting donations boxes in mosques.

Many parliamentarians have been accused of high corruption and bagging millions of Rufiyaa in the “transfer fees” from party to party, which though not proven have been allegations made in the protected confines of parliament by MPs with immunity from prosecution, though the accusations are aired on public TV.

In sum total, the current Maldives parliament seems to be widely perceived as an inefficient monster which has become a burden on its people.

Comments Off on MPs take allowance for committee meetings not held

← Freedom of Movement and Democracy
Time for regional political parties!!! →